Recently got dumped a few GM tubes (im told they're a SBM-20) and i've always wanted to be able to see what I can do with one... There's a reasonable amount of info available, but alot is also quite hard to follow. Ultimately, i thought this one would be a good circuit to start with cause its probably the most compact/simple (not to mention one of the best schematics).

Having said that, im planning on making a USB and SMD version connected to either a atmega32u4 or an ESP8266 (or maybe an STM32), so i'll have 5v available and maybe 3.3v. I did find one post where someone had tried to do it (as well as a link to yet someone else's attempt) but with no resultant schematics or the like viewtopic.php?t=501 other than a suggestion that the STL128DN would be an smd capable component. Thats kinda where im stuck (one post i found was using a much lower spec'd transistor on the output for the job and claimed that it worked ok despite not being rated for the voltage).

Anyway, couple of questions I had, why does the output transistor need to be particularly quick at switching? I would have assumed you would need a pretty large number of pulses before that would matter much? I assume also that VR1 is really the thing that controls the voltage ultimately going to the tube? or should i be changing the input voltage to effect the output (or something else entirely)? What im really aiming for is something that can be adjusted for the various GM tubes that fall into that 400v above bracket that seem to be readily available. Lastly, everything i do is OSH so for better or worse, it'll end up on github.
Top

The HV transistor needs to be a fast switching type because it is responsible for quickly switching current through L1 in order to generate a series of high voltage pulses that are filtered to create the HV supply. I'd try the STL128DN or a similar transistor - I can't guarantee that it will work but it should be a good starting point.
Jeff Keyzer
http://mightyohm.com
Top

I'll give it a shot, though on the switching speed thing, i was more refering to Q2 (The tranny driving the pulse output on GM_PULSE). Though i realise i can easily get a 2n3904 in smd form anyways so thats not important. I'll post the schematic in here before i fling it off to the printers. Really quite torn as to which chip to go for between the Atmel 32u4 and the ESP, both have advantages.

Thanks for the reply!
Top

I suspect most switching NPNs would work fine for Q2. The 2n3904 is just a generic NPN.
Jeff Keyzer
http://mightyohm.com
Top

Ok, heres my first itteration, very much a work in progress though:

Ok, i now also have the layout (the textual stuff needs to change but the layout and tracks will stay the same from this point):

Any comments/suggestions appreciated as well.
Top

Sent the current version off to the printer today, once it arrives I'll write some code and see how it goes. Was tempted to put an ESP-01 header in there also, but ultimately chose not to.

Boards have finally arrived but sadly I wasn't ready with the parts i'd need to put it together: 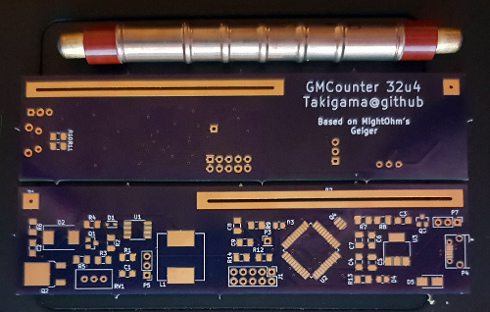